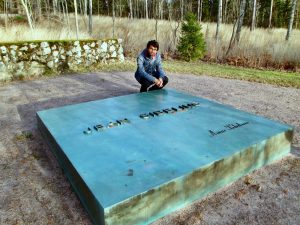 With Sibelius’ music, there is always something resonating that I can’t often put words to but moves me very deeply. It certainly has to do with his overwhelmingly large structures that tower above us mortals like cathedrals, although maybe in his case they are cathedrals of ancient wood, or hewn from rocks that have been there always, combined with all this buzzing, humming and the oscillating below the surface, like all of natural life is in every single bar.
If you were to take out the timpani rolls from a Sibelius score the notes would still make sense but the piece would become empty—the presence of the timpani is the incessant rustling of the leaves in a Finnish forest, even when there is no wind: you don’t notice it when it’s there, but if it were to disappear, everything would be lifeless.

While his 5th Symphony is often described as ‘triumphant’, ‘heroic’ even, Sibelius himself talked of ‘quiet joy’ and ‘elegance’ in this piece and was facing crisis after crisis in his compositional, personal and national life while writing it. It took three versions of the piece before he was happy (enough) with the result, spread out over almost five years of inner and outer turmoil.
What resonates most with me, I think, is the fact that in this piece he is trying to capture a sense of impermanence, a sense of constant change, and having to accept that. The piece is a series of ‘rotations’ in which every rotation discards and evolves previous material as the moment requires. Just as he, as a composer, would compose and then destroy passages or even entire works throughout his life, this Symphony takes up ideas that are fleeting, briefly materialise and smile at us, only to disappear again and dissolve. Sibelius shows us, through his music, how you can be attached to something (someone?) you love while letting it go at the same time. Or facing your or someone else’s physical or mental illness, that means you have to accept and go on, because life goes on.
The group of swans he saw circling near Ainola, his chosen rural home in the woods where he and his wife Aino are also buried, inspired the swan song of the horns in the last movement of the symphony. It emerges majestic, sorrowful and driving all at once, but is also something that has always been there in the background, even when no-one is playing it (or when it has stopped sounding). And at the most ‘triumphant’, ‘heroic’ climax, the level of dissonance, resistance in the orchestra is visceral, unsettling, and terrifying: the final conclusion (a series of severe, beautiful chords with endless silences in between) is not a hero who soars and flies, but one who faces fate with acceptance, equanimity and introverted strength. Yes, there is ambivalence too, and the tears of the struggle aren’t gone yet, but things end well—for now. It is positive and negative simultaneously. The protagonist is reborn, forever changed and changing.

In 2013 I had the amazing opportunity to visit Ainola (thanks Klaus, Ellen, Sami and Taru!) where Sibelius lived and worked, the church where his funeral was held, and also to see Finland’s best orchestras rehearse and perform his music. The Sibelius monument in Helsinki shows a strong, troubled, and self-critical composer in the midst of nature, with an organ-like structure that is played by the wind in an inaudible music that is present in all of his works. Tonight I conduct the 5th Symphony with the amazing RNCM Symphony Orchestra, alongside two amazing pieces by Lutosławski and Bartók (featuring the amazing and fearless Sitong Meng), and I couldn’t be more thrilled.